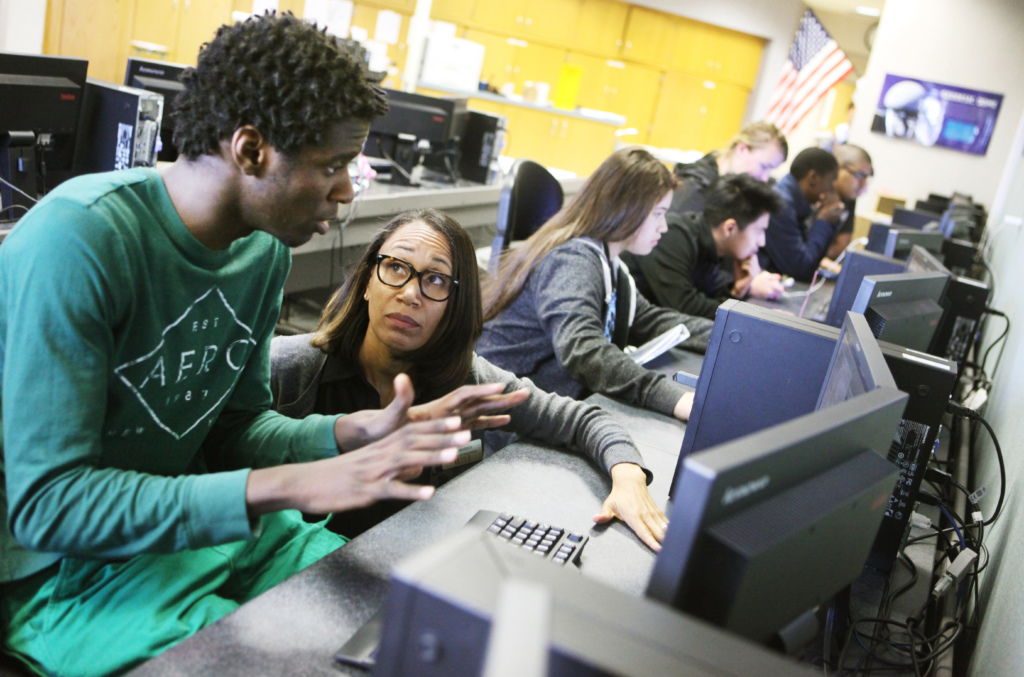 Tamara Markey had always wanted to be a teacher.

But as a young Black woman who was good at math and science, she was encouraged to pursue engineering. She went to Purdue University, got a degree in industrial engineering, and spent nearly a decade working in the oil industry. Once she started a family, the desire to teach only grew stronger as she volunteered in her children’s classrooms and chaired school fundraisers.

“When the opportunity came about for me to be able to pursue being a full-time teacher, I had to jump at it,” Ms. Markey remembers. “It was what I was supposed to do.”

On the day of her interview for the WW Teaching Fellowship, Ms. Markey pulled her hair back and put on a suit and fuchsia sweater. She had transformed her dining room into a mock classroom, using the mirror as a stand-in whiteboard to practice the lesson she would deliver.

After driving an hour to get there, she sat across from the interviewer, stumped.

“If you don’t get this, what are you going to do? What are your next steps,” the interviewer pressed.

“I’m only thinking positive thoughts that I will get this,” she responded. “I guess I’ll go back to the drawing board and figure out another way to get into the classroom.”

Life as a WW Teaching Fellow and then as a teacher of record was a sea change for both Ms. Markey and her family. After 12 years at home raising her children, and with elderly family members in the household, Ms. Markey approached this new chapter with the same determined optimism she deployed during the application process.

New laundry schedules were assigned, meal prep was divvied up, and Ms. Markey dove into life as a teacher. Now, four years in, she reflects on what she has learned that has helped to shape her craft.

Ms. Markey is warm in a way that instantly puts people at ease—and that carries over to her classroom. As a teacher, she works to build meaningful and holistic relationships with each of her students.

“The relationships are the most rewarding,” Ms. Markey reflects. “They bring me so much joy. Sometimes they bring pain too, because every story is not always a Cinderella story. Sometimes

you witness a kid’s going through things that you really wish you could save them from, but it’s bigger than anything that you can do in the classroom.”

Ms. Markey was a pre-engineering teacher at the McKenzie Center for Innovation and Technology in Indianapolis when she was named the 2019 Indiana Teacher of the Year.

“Tamara’s story of bringing real-world engineering experience to the classroom only helps to better position the students that walk through her door,” said Indiana Superintendent of Public Instruction Jennifer McCormick in the announcement.

At the surprise announcement, as Ms. Markey held back tears, McKenzie Center Principal/Director Mari Sawyne used these words to describe her: “Amazing, risk-taking, innovative, remarkable, humble, and above all giving.”

“I wouldn’t be a teacher if I hadn’t received that Fellowship,” reflects Ms. Markey. “I wanted the teacher training…I think that the job is far too important to not have that background.”

Ms. Markey is currently away from the classroom as her family relocates. She remains committed to teaching and is also considering a move into administration.

“I still pinch myself. I don’t understand how the recognition happened,” says Ms. Markey. “From those to whom much is given, much is expected, and sometimes it can be a heavy weight. But at the end of the day, I just do my best and I think my kids know that, my biological kids as well as my educational kids.”