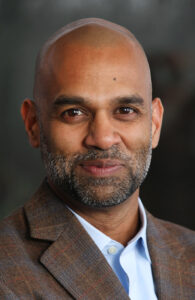 A pioneering social entrepreneur, Rajiv Vinnakota serves as President of the Institute for Citizens & Scholars, leading its mission to cultivate the talent, ideas, and networks that develop lifelong, effective citizens. To that end, he works tirelessly to build relationships with the partners and sponsors without whom Citizens & Scholars could not succeed, while at the same time fostering a strong organizational culture focused on American civic values.

Raj has dedicated his life to initiatives that help American citizens from all walks of life to become productive and engaged members of society. Early in his career, Raj co-founded the SEED Foundation, the nation’s first network of public, college-preparatory boarding schools for underserved children. The SEED schools were featured in both television and film, and Raj won multiple awards for his work with SEED, including Harvard University’s Innovation in American Government Award, Fast Company/Monitor Group’s Social Capitalist Award, and Oprah Winfrey’s Use Your Life Award. Raj continues to serve on the Board of Directors for SEED.

Before joining the Institute for Citizens and Scholars, Raj served as Executive Vice-President of the Aspen Institute. In this role, he launched and led the new Youth & Engagement Programs division devoted to youth leadership development, civic engagement, and opportunity.

Raj currently co-chairs the Civics and Civic Engagement Taskforce for the United States Congress Semiquincentennial Commission celebrating the 250th anniversary of the country’s founding. Raj also co-chairs the Civic Learning Pillar of the Partnership for American Democracy, a coalition of American leaders directing resources and attention toward efforts to save U.S. democracy.

He is the author of From Civic Education to a Civic Learning Ecosystem and has spoken on civic engagement to the Fordham Institute, Results for America, and the ASU GSV Summit. He regularly appears on media outlets such as NBC, CBS, and The Bulwark.

Raj grew up in Milwaukee, Wisconsin, the child of Indian immigrants who instilled in him the faith that a good education could open doors to great things. He graduated from Princeton University and is a recipient of Princeton’s Woodrow Wilson Award, the university’s highest honor for undergraduate alumni.

Manage Cookie Consent
To provide the best experiences, we use technologies like cookies to store and/or access device information. Consenting to these technologies will allow us to process data such as browsing behavior or unique IDs on this site. Not consenting or withdrawing consent, may adversely affect certain features and functions.
Manage options Manage services Manage vendors Read more about these purposes
View preferences
{title} {title} {title}