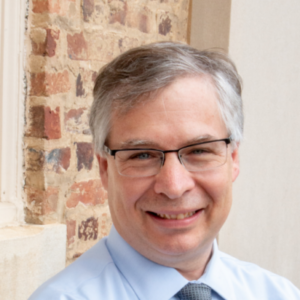 When most people think about democracy in America, their back of the envelope understanding is usually right. But, according to C&S Fellow Dr. Andrew Perrin ’00—recipient of the Charlotte W. Newcombe Fellowship—the focus is often times misplaced.

“People worry too much about the kind of mechanics or the technical aspects of democracy—what’s the voting age, how do you register, who gets to,” says Dr. Perrin. “Those things are really important. But, in the longer course of American democracy, it’s actually the structures of the belief and the sense of belonging and connection–much more what we would call cultural aspects of democracy—that make democracy more durable. Democracy lives or dies more by those cultural questions than by the mechanics.”

Dr. Perrin has made those cultural and social aspects of democracy his chief focus as a sociologist professor, the Ruel W. Tyson Distinguished Professor of the Humanities, and director of the Institute for the Arts and Humanities at the University of North Carolina Chapel Hill.

Throughout his work, Dr. Perrin has grappled with the question of what people need to know, be, and do to make democracy work.

To be an active and engaged citizen in a democracy, he has identified three core practices: “Belongingness in some sort of group or public community, a set of rights that come with that belongingness, and a set of duties that are expected as a result of that.”

As a college professor, Dr. Perrin is especially interested in the role that higher education plays in building these core practices in students. “I think it’s much more important that students learn some of these basic skills of asking great questions, using evidence to address them, exercising good judgment, listening well to others,” notes Dr. Perrin. “All of those come prior to joining a movement, signing a petition, voting, marching in the streets. We want students, we want everyone to do that sort of thing, but we want them first to be thinking and considering and discussing.”

These skills of asking questions and exercising good judgment were at the forefront when Dr. Perrin led the redesign of UNC’s general education undergraduate curriculum from 2016 to its approval in April of 2019.

Historically there has always been a strong link between higher education and citizenship, he says, and research has shown that people with bachelor’s degrees are more likely to vote, to volunteer, to talk to people they may disagree with.

“We were very explicit that we saw education for citizenship as one of the core goals of the curriculum,” says Dr. Perrin. “Instead of saying, this third of the curriculum is devoted to citizenship and that third is devoted to career, our approach was to try to develop students who are really good critical thinkers, and that that was going to be useful in both of those domains.”

The new curriculum was overwhelmingly approved by the Faculty Council and is set to be fully implemented for students starting at UNC this fall. The process, as outlined by Dr. Perrin in a 2020 blog post about the process, not only allowed for him to help shape the strategic goal of citizenship campus wide, it also gave him insight into good faith actions and working through conflict. These good faith actions are something he also sees as necessary in the larger societal conversation about good citizenship and the strength of our democracy.

“Trust is crucial,” says Dr. Perrin. “It doesn’t have to be absolute. It’s not that everyone has to trust everyone else thoroughly, but some level of assumption of good intention needs to be a piece of [citizenship]. I think that the discourse at this point is pretty bad on that. The expectation that one’s opponent is almost by definition, acting in bad faith, I think is a real problem.”

This summer, after 20 years, Dr. Perrin will be leaving Chapel Hill to take a new position at the Stavros Niarchos Foundation Agora Institute at Johns Hopkins University. The goal of the Agora Institute is to strengthen global democracy through powerful civic engagement and informed, inclusive dialogue. In this new position, Dr. Perrin will continue to look into social aspects of citizenship and democracy and the role of higher education in supporting them.

“The expansion of the public sphere to include multiple racial groups, to include women more significantly, certainly LGBTQ communities. To include these voices is a really important pro-democratic transition. It also, particularly for white people who’ve been in the public sphere all along, can make it seem like it’s more uncivil and less genteel. But I think we need to recognize that in part that’s because it’s better, it’s doing more of its job.”

Dr. Perrin was awarded a Charlotte W. Newcombe Fellowship from Citizens & Scholars in 2000. And while the money at the early point in his career was incredibly helpful, he’s also reflected on what it meant to be supported by a grant for topics in religion, ethics, and values. “It did help me to think, wow, you know, maybe my research is more interdisciplinarily engaged that I had realized it was.”

As he continues to study the links between higher education and democracy, Dr. Perrin sees the value in championing the arts and humanities and the questions they teach their students to ask. “Anything like the Newcomb that can invest just in the fact of valuing these questions and of approaching them in a serious and unfettered way, I think that’s really important.”

This story was originally published in the spring 2021 issue of Fellowship, the newsletter of the Institute of Citizens & Scholars. Since publication, Dr. Perrin has joined the SNF Agora Institute at Johns Hopkins University.