HISTORY FOR ALL: ERICA ARMSTRONG DUNBAR ON MAKING HISTORY ACCESSIBLE 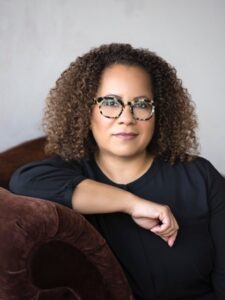 History, according to Erica Armstrong Dunbar CEF ’03, is imperative.

“I believe that as a scholar it’s my responsibility to offer scholarship to people beyond the academies,” says Dr. Dunbar. “I firmly believe that knowledge is not just for the learned—that knowledge has to be translated and offered and accessible to everyone.”

This desire to make history accessible to more people shaped the writing of Dr. Dunbar’s most recent book, Never Caught: The Washingtons’ Relentless Pursuit of Their Runaway Slave, Ona Judge. A 2017 finalist for the National Book Award, the book tells the story of Ona Judge, a slave who fled George Washington’s residence in Philadelphia, and the manhunt that followed.

Reading and writing have always interested Dr. Dunbar and it is that—as well as growing up in Philadelphia, the “ground zero of history,” and her Quaker education—that initially sparked her interest in history.

“From an early age I asked the question, ‘Why don’t I see people that look like me in this history?’” she remembers. “I think from an early age and even into high school that became something that troubled me and motivated me.”

Through the support of faculty and a Mellon Mays Undergraduate Fellowship, Dr. Dunbar developed more of an interest in research and attended graduate school. Once at Columbia, she found her area of focus: “I started thinking about the importance historiographically of the Civil War, of reconstruction, of the 20th century—and without understanding the 18th century and the early 19th century, you can’t put all of those pieces together.”

Dr. Dunbar is now the Charles & Mary Beard Professor of History at Rutgers University, specializing in the study of the lives of 18th- and 19th-century American women of African descent.

Her career has been enriched, she says, “through opportunity, through fellowships, through faculty and support, and also just a love and a feeling of obligation to do this work,” say Dr. Dunbar. “Fortunately, I feel like it’s my life’s calling and I’m honored to do this work.”

As a scholar, professor, and author, Dr. Dunbar can reach a wide audience. In order to expand that reach further, she worked with Kathleen Van Cleve on a young-reader adaptation of Never Caught.

“One of the most pressing civil rights issues of the 21st century centers on education and accessibility and equal education for all,” argues Dr. Dunbar. “If we want to deliver history and deliver education to others, we’ve got to think about doing it in ways that are more interdisciplinary, more digital, and that will engage a 21st century readership.”

While she acknowledges that not all scholarship is suited for treatment as a popular narrative, Dr. Dunbar feels that the life of Ona Judge was well suited to be an entryway to history for both young and old. “If we want history to be presented to students, young students, to children, then we as historians have to give teachers the text to do it.”

Never Caught—with its questions of freedom and presidential power—feels timely given current events. But, by ensuring that the public has access to a more diverse, inclusive, and accessible history, we can try to make more sense of what is happening.

“I do believe that uncovering the past and thinking critically about the past helps us live a better present,” says Dr. Dunbar. “And hopefully, it points us toward a future that learns from the mistakes of the past.”