Book Spotlight: Skepticism and American Faith: From the Revolution to the Civil War 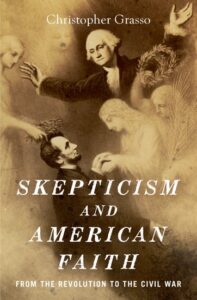 Religious skepticism played a defining role in the early and formative years of the Republic. Christopher Grasso looks at this often overlooked area of religious history and explores how it shaped religion’s place in politics and the evolution of American nationalism.

Instead of focusing on evangelical and church leaders, the book focuses on how questions and doubts about religion shaped the worldview of everyday people. Few people publicly voiced their lack of faith—a notion seen as a threat to the bedrock of American society—but, as Dr. Grasso argues, those doubts influenced and sometimes radically changed the individual lives of early citizens.

“Revealing…Grasso’s book demonstrates the centrality of skepticism in understanding how the American inclination to faith has been ‘forged in the foundry of culture,’” said Publishers Weekly.

Dr. Grasso is a professor of history at the College of William and Mary.