Being Square with History 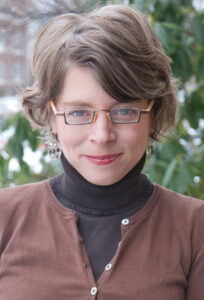 A wide-angle history of the United States, with tightly drawn throughlines anchored to its great premises, fine-grained attention to its everyday moments, a deep-rooted sense of its unresolved tensions: These Truths by Jill Lepore CN ‘93 may be the most ambitious work of its kind in decades, as reviewers nationwide have attested since the book’s release this September. “An explanation of the origins and ends of democratic institutions,” she calls it in the preface; “chiefly a political history… [b]ut it does include episodes in the history of American law and religion, journalism and technology…because these are places where what is true, and what’s not, have sometimes gotten sorted out.”

And yet, as far-reaching as is Dr. Lepore’s multidimensional new volume, she is following it with an even greater challenge: adapting it for use in U.S. history classrooms.

Dr. Lepore—winner of the prestigious Bancroft Prize and finalist for the Pulitzer Prize and the National Book Award—is the David Woods Kemper ’41 Professor of American History at Harvard University.  (She is also a student of another Fellow and noted American historian, John Demos WF ’59.) Widely known for her regular contributions to The New Yorker, she has written eleven books to date, on subjects ranging from the Boston Tea Party to early American language and letters to the life of an accomplished and all-but-forgotten 18th-century woman, Benjamin Franklin’s sister Jane.

“I’ve heard from a few people who tell me that they are offended that the book begins in 1492,” Dr. Lepore says, “These are people who have not read a page of the book. This is simply an ideological position. Historians are responsible for that. We need to set top-level priorities. Are we so ideologically fixated that we can’t even address historical realities?” 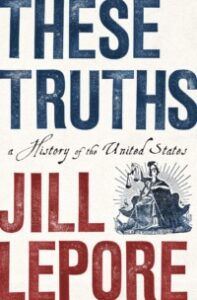 These Truths itself points to Dr. Lepore’s determination that ideological manipulation—from any side—is toxic, and that it must not eclipse genuine historical thinking. In one of the key final chapters, “Battle Lines,” she traces the ways in which social issues became radioactively partisan in the late 20th century, with the Internet “com[ing] to function as a polarization machine.”

Even in a brief conversation, it is evident that she sees the effects of this polarization on her own field: “Historians have wasted a lot of energy on arguing with each other instead of making the case for the value of history to the greater public.” While many Americans today claim to “love history,” Dr. Lepore says, what they really love is heritage tourism or genealogy, a neatly packaged and unquestioned experience. “There’s a place for that sort of thing”, she says, “but it’s not the same as the study of history, as a discipline and a method.”

Instead, she comments in an interview with The Harvard Gazette, “The whole argument of [These Truths] is that the study of history is an inquiry.” She makes that argument blatant in its preface: “History isn’t only a subject; it’s also a method. … The work of the historian is not the work of the critic or moralist; it is the work of the sleuth and the storyteller, the philosopher and the scientist, the keeper of tales, the sayer of sooth, the teller of truth.”

The antidote, she argues, is to teach young people how to study, assess, and analyze historical sources, how to think more like historians. It’s a problem, she says, that the teaching of history does not always emphasize investigation of sources. And it’s a problem that sentimentality—even with the best of intentions—can mislead students. “We have to be willing to be disquieted by the past, not to confuse it with nostalgia, but to be square with it,” she observes.

In this spirit, at the conclusion of These Truths, Dr. Lepore charges that neglect and damage by liberals and conservatives alike now leaves a new generation to rebuild the ship of state, and, most of all, “learn an ancient and nearly forgotten art: how to navigate by the stars.” Her gloss on this for Newsweek (and, it is not hard to extrapolate, for all students of history): “Look at the world around you with your own, true, God-given powers of acuity and observation and compassion, and think about what would be in the public good. Then follow that star.”