An Entire Life of Idealism

Michael O'Donnell on 50 years at UVA-Wise 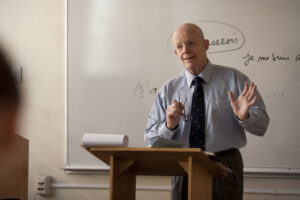 “I look upon this next stage of my education as the culmination of the plan I have been following broadly since I first entered secondary school, a plan that has as its goal my becoming a university instructor,” wrote 23-year-old Michael O’Donnell WF ’66 in his application for a Woodrow Wilson Fellowship. Professor O’Donnell, fondly known on campus as “O’D,” has overshot his goal: Last fall, he celebrated his fiftieth year at the University of Virginia’s College at Wise.

“I love the classroom give-and-take,” he says, in a rapid lilt familiar to generations of students. “I’ve loved it all my life. The classroom is the most exciting place in the world to me.”

Raised in Mauch Chunk (Jim Thorpe), Pennsylvania, Professor O’Donnell decided to join the Peace Corps, serving for two years in francophone Morocco before returning to finish college. The experience set him on course for graduate work in French at Indiana University–Bloomington. He had just won a teaching award as a graduate assistant there—the first first-year teacher ever to do so—when, one Friday afternoon, he got a call from the academic dean of Clinch Valley College in the Appalachian Mountains of southwest Virginia.

“‘We’ve got an opening in foreign languages and I want you to come down and look at the place,’ he said, and of course I’d never heard of it,” Professor O’Donnell recalls. “I figured I’d give it a try for a year or two, and here I wind up 50 years later. One Friday night—we used to play some penny poker—I asked him, ‘Hey, how did you ever get my name?’ and he said, ‘I saw your name on a list of Woodrow Wilson Fellows and I was impressed and thought I’d give you a call.’ How do you like that?”

Having seen Clinch Valley College transform from a two- to a four-year institution, then become UVa–Wise, has been “an evolution in every way,” he says, “yet almost imperceptible. The kids don’t get old because they change every year and you don’t realize you’re getting old. You have to stay young and you have to stay sharp; that’s what you do.” 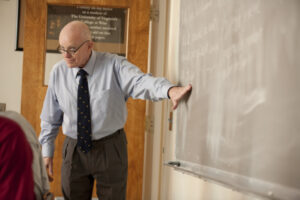 Even so, there have been noticeable shifts among the rural campus’ mostly first-generation students, he says. “The major change, of course, is that with the Internet they have access to more information than they would have had 50 years ago. I say to them, ‘Look, are you satisfied with Google, or do you actually think it’s important to have stuff in your head?’ They know you’ve gotta have stuff in your head as well. They’re really, really smart.”

On the other hand, Professor O’Donnell notes, the new global economy has also changed his students’ lives. “You get emails—from Japan, a kid picking grapes in New Zealand, somebody geocaching in Eastern Europe. In the old days they could have stayed here and made more money mining coal. Now more than half of them are going to have to leave, and they realize they’re competing with the whole world. But they’re inspired. They’re okay with that.”

His own world travels since his time in the Peace Corps have taken Professor O’Donnell to every continent, to more than 60 countries, sometimes in conjunction with service projects. The experience has generated three teaching and travel memoirs, and continues to influence his approach. “The average American sees something about poverty in other countries on TV, but when you see it and you live with it, the suffering and the destitution, it changes you,” he says. “And I bring it to the classroom. Seven days a week I turn on BBC World at 2, 3, 4 in the morning, and I share that with my classroom.”

O’D says he can’t imagine what else he would have done with his life. “Someone close to me once asked me, ‘Why are you wasting your life in that place?’ I look back 50 years later, and I can name 10,000 students I’ve taught—it’s maybe 20,000 or 25,000 if you include the time that I was dean of students,” he says. “Maybe we were just a bunch of hippies in the Peace Corps, but I was serious about it. That idealism led me to the Woodrow Wilson Fellowship which led me to college teaching, and that’s an entire life of idealism, because that’s all I do—try to help young people get ready for life, for 50 years running, one student at a time, every day, every year.”